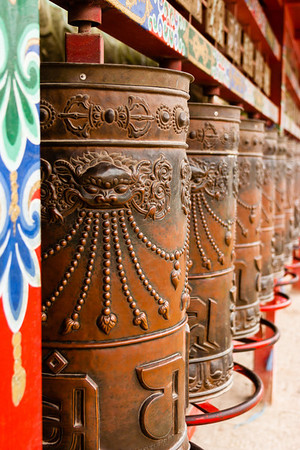 Prayer wheels, or mani wheels, are large drums inside which are scrolls of Tibetan Buddhist prayers wrapped tightly around the center axle. Tibetan Buddhist practitioners believe that each turn of the prayer wheel is equivalent to them having said those prayers. Saying the scripted prayers earns them merit that will improve their status or situation in their next lives. Mani wheels are elaborately carved with Tibetan Buddhist symbols, including religious instruments and deities, as well as mantras. The ones here are carved with the six-syllable "Mani Mantra", one of the most commonly known and recited among the laity.